Thou Shalt Not Suffer a Witch to Live

Bowing to the wishes of Amazon.com I have revised the cover to my novel, “Though Shalt Not Suffer a Witch to Live.” The original cover illustrated a young woman accused of witchcraft, the usual sentence in England being death by hanging. However, it could also be construed as a young lady contemplating suicide, and I accept that this has unfortunately become an all too common occurrence.

The new cover encapsulates the famous Mistley Towers, which are a feature of the second book in the series “Back to the End.” 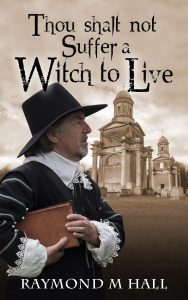 The man on the cover represents the odious Matthew Hopkins, who labelled himself as the Witchfinder General in the time of Oliver Cromwell.

The title is taken from the Old Testament, Exodus 22:18 Under which the cruel persecutions took place, and in some parts of the world still take place in today’s ‘Enlightened Society.’